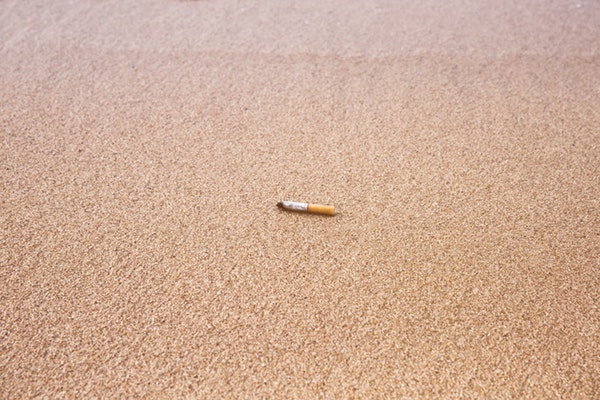 Cigarette butts don’t get enough flak in the media.

But the thing is, cigarette butts are just as bad, if not worse.

Every year smokers burn through 5.5 trillion cigarettes. Most get flicked away and end up littering the environment (up to two-thirds, according to some estimates). In fact, cigarette butts are the biggest ocean contaminant. Not plastic straws, like you probably thought.

This is all to say that butts are bad news. While the cigarette itself is biodegradable, filters are not. They contain cellulose acetate, a type of plastic that can take up to ten years to photodegrade. And though cigarettes do biodegrade, they aren’t exactly good for the environment. Look at the damage they do to us. A recent study determined that a single butt in just one liter of water can poison and kill a fish.

That’s why organizations like the Cigarette Butt Pollution Project are striving to eliminate tobacco waste altogether. Though cities haven’t talked bans yet, they’re taking the issue very seriously. The City of Toronto, for instance, has launched a campaign advising Torontonian’s to properly dispose of their butts. It’s called: “Don’t be a flicking idiot”.

So, how do I dispose of my cigarette butts?

Butts go in the garbage, never on the ground. Your city might have ash catchers, too. But make sure to put your smoke out before tossing it. Cigarette butts cause a surprising number of fires every year. Nobody wants that on their conscience.

Here’s the thing, though. Even if you do end up tossing that butt in the garbage, there’s a good chance it’ll still end up polluting the environment. That’s because they’re small. So even if it does end up at the landfill, a gust of wind, an animal, pretty much anything, might carry it someplace it isn’t supposed to be.

If you want to be especially vigilant, you can buy cigarettes without filters. That way, if your butt does end up as litter, at least you aren’t introducing plastic waste to the environment. FYI, filters don’t make cigarettes safer to smoke. In fact, they might even do the opposite. Just something to consider.

If your city is a member of the Recycle Coach Network, download our app and we’ll hook you up with local waste and recycling information, including tips and tricks to reducing your waste output.