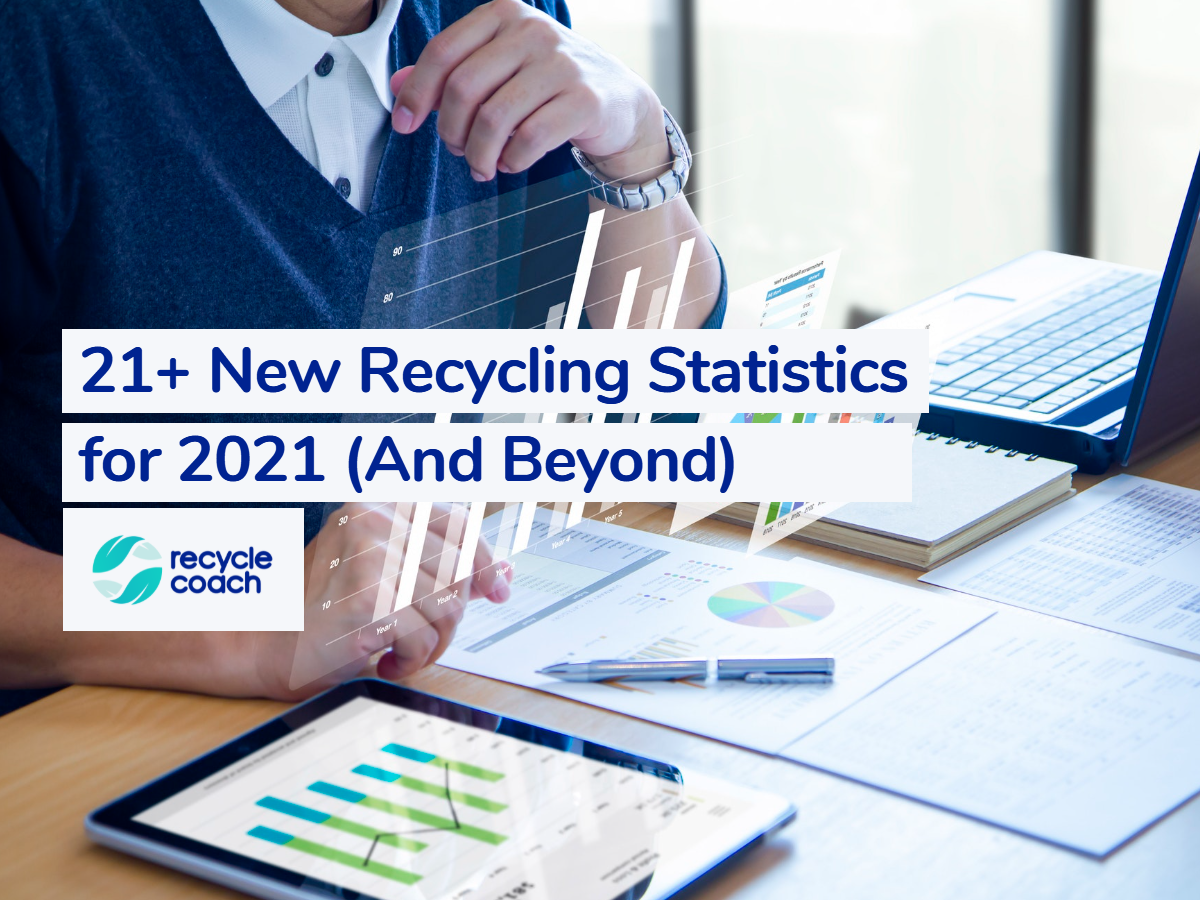 What are the latest US recycling statistics in 2021? 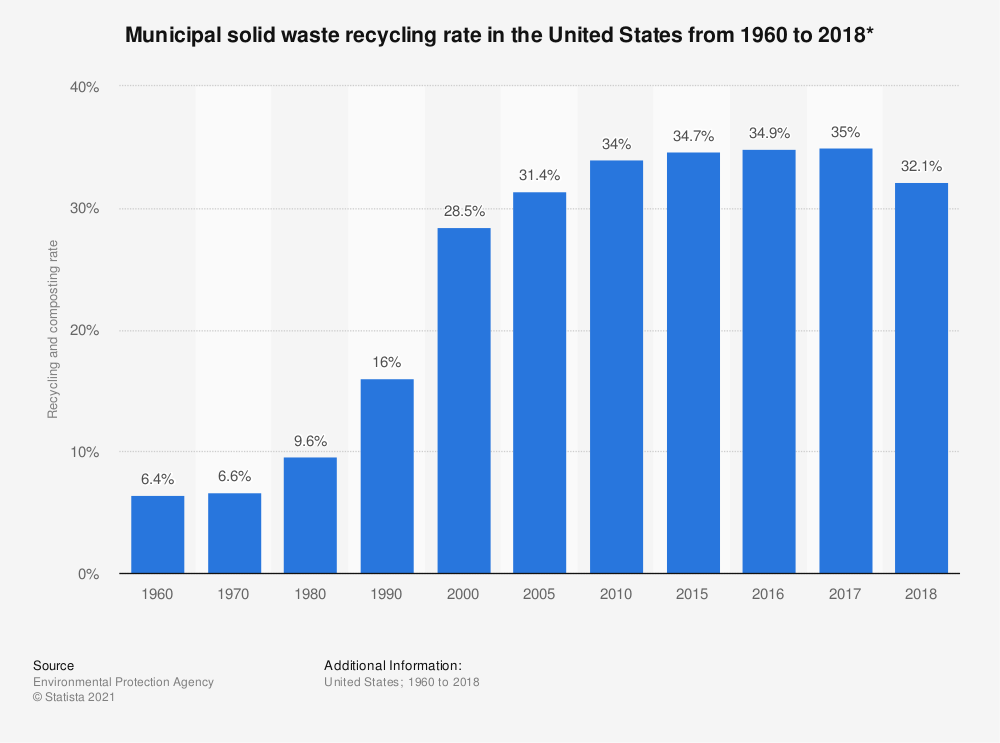 Use these as a basis for decision-making to set stronger, data-specific recycling policy.

#1: Contrary to popular sources the US recycling rate is not 34.5% like it was in 2015. The recycling rate for all materials (solid waste and compostable) fell from 34.7% in 2015, to 32.1% in 2018. Americans are recycling less than we did in 2015. This is the most current EPA recycling statistic as of 2021. As yet, there is no news on how the pandemic directly impacted the recycling rate.

#2: On November 17th, 2020 at the America Recycles Summit – the Director of the EPA announced the goal to increase the national recycling rate to 50% by 2030.

#3: At the top of the list of measures taken to achieve the improvement in the recycling rate, is to reduce contamination in recycling. Wish-cycling is still enemy #1, with the EPA citing a stronger need for public education and outreach.

#4: According to a report by Verisk Maplecroft, America is the world’s top waste producer. Every year we create 822,000 Olympic sized swimming pools worth of solid waste, but we only recycle 16% of it (131,520 swimming-pools worth). While this isn’t a new recycling statistic it remains something that must change.

#6: 67% of that total amount was paper and paperboard (corrugated boxes to be precise).

#7: Some 4.47% was plastic. According to the EPA, there has been a 9% increase in plastic recycling since 1980. Contrasted with other material increases like paper (68%) and yard trimmings (63%), plastic is the most under-recycled material in the US.

#9: The worst 4 States for recycling are West Virginia (2%), Louisiana (4%), Alaska (6%) and Tennessee (7%). The difference between the best and worst States is access to recycling data via state-driven reporting systems, recycling policy and investment in more effective recycling systems.

#11: San Francisco diverted 80% of its waste in 2012 and is the closest US State to achieving its zero-waste goal. The EPA has a case study of its success here.

12: 91% of plastic isn’t recycled, and the rate of plastic production has drastically accelerated since the early 2000s. The global waste system currently cannot accommodate all plastic waste in existence.

#13: Some 80% of items that end up in the landfill could be recycled. It is estimated that 75% of all waste can be recycled, but only 30% actually gets recycled. That leaves a massive 45% gap that needs to be closed!

#14: The green packaging market was valued at $258.74 billion in 2019 with an expected growth rate of 6% year over year until 2027. Sustainable, compostable alternatives are quickly replacing damaging and harmful plastic materials.

#15: According to Penn State, the act of recycling paper instead of making it from trees, generates some 74% less air pollution and uses about 50% less water. Recycling paper actively reduces precious resource consumption.

#16: Based on a US Geological Survey, in 2017 about 47% of aluminum, iron and steel in the US was recycled. At the same time 69% of lead was recycled and 62% of magnesium.  Lead, gold, and silver remain the metals that are recovered most. This does tend to vary, with the recovery rate of gold from e-waste relatively low.

#17: E-waste is still the least regarded recycling material (2%) yet it creates the highest amount of toxic waste on entering the landfill (70% of all toxic waste comes from e-waste!).

#18: Every hour in the US, 2.5 million plastic bottles are thrown away. That’s 695 bottles every second, and it takes 500 years to forever for them to decompose in a landfill.

#19: Over 80% of Americans throw away good food because they don’t understand how expiration labels work. The US throws away an enormous amount of food, about 40 million tons (30-40% of the total food supply in the US).

#20: Nearly 100% of textiles and clothing are recyclable, yet in the US we only recycle 14.7% as of 2018, which roughly equates to about 2.5 million tons. With a landfill rate of 11.3 million tons for textiles that are recyclable, this sector needs considerable improvement.

#21: Glass in the US is recycled at a rate of 31.3% in 2018, which amounts to 3.1 million tons. Some 1.6 million tons of that glass was combusted for energy recovery, while 7.6 million tons found its way to the landfill. This leaves lots of room for glass recycling improvements in 2021.

Based on the most current figures from the EPA, every municipality has a lot of work to do to improve material recycling in their areas. If you can increase education and improve the overall recycling rate while reducing wish-cycling – you can be an instrumental part of helping the US achieve a 50% recycling rate by 2030 – or sooner.

Which of these recycling statistics and facts stood out as the most pressing in your city?