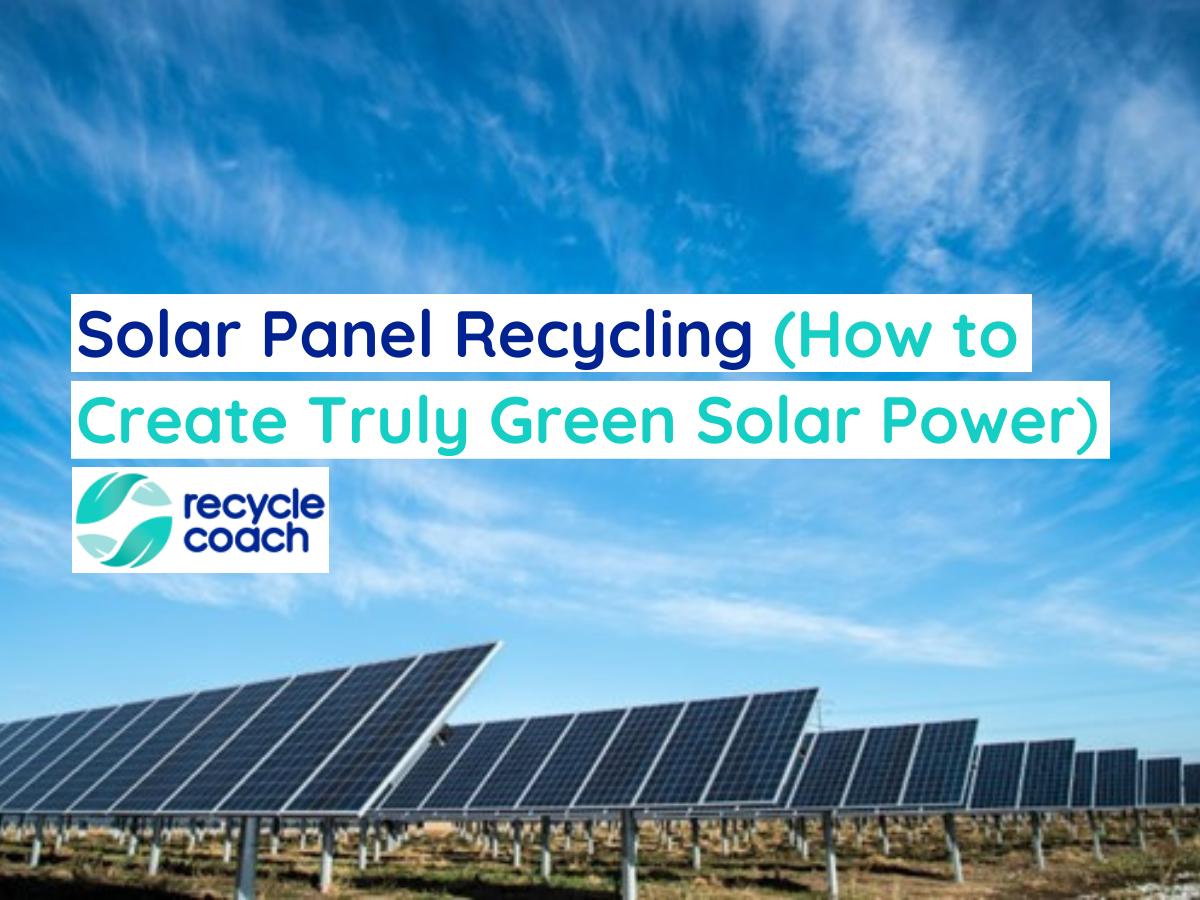 Solar power is a relatively new technology—solar panel recycling is even newer.

Solar panels are a valuable asset to society as a means for generating clean, renewable energy from the sun—they also contain valuable materials that are worth recycling and reusing, but that are often lost to landfill.

Though panels can be installed and left in place for up to 30 years, to harness truly green solar power, forethought must be given to the disposal of the solar panel once it reaches the end of its life.

How Are Solar Panels Recycled?

Although most of the construction materials used to make crystalline-silicon solar panels are recyclable, the current methods of recycling solar panels are not ideal. Solar panels are designed incredibly well to withstand climate, but because of this, they’re also extremely difficult to deconstruct and recycle.

While about 75% of a crystalline-silicon solar panel is glass, a well-established recycling industry, other components are not as straightforward to recycle. Solar panels contain small amounts of a ton of different valuable metal elements such as aluminum, silver, tin, solar grade silicon, and copper.

The aluminum frame, copper wiring, silicon cells, and plastic junction box are all recyclable as well, but separating these materials is strenuous.

Disassembling the panels is difficult and the ideal method to recycle solar panels is rather involved.

Only after the panel is completely deconstructed can the recycling process take place.

While processes for electronic waste such as glass and aluminum recycling are well-established industries, the infrastructure and high-tech machinery required for proper solar panel disposal is not yet commercialized. When solar panels are recycled in the same manner as electronic waste, valuable metals and silicon solar cells are often incinerated instead of being reused in new panels.

Most recycling companies do not have the infrastructure required to recycle solar panels and there are not many existing facilities for solar panel recycling. According to the World Economic Forum, it may be time to ramp up initiatives in solar recycling.

Although recycling is the most eco-friendly way to dispose of old solar panels, the process is still rather new, tedious, and expensive. Recycling these panels requires advanced technology and machinery.

One of the major issues with solar panel recycling is simply that it is a new concept that has yet to be perfected. Though the solar panel recycling process is not streamlined in most places and can be extremely expensive, according to MIT Technology Review by 2050 the waste materials from decommissioned panels could be worth $2 billion—this may be worth saving to most companies.

For many people and even in industrial uses, it’s much easier and cheaper to simply throw them away to end up in a landfill. In other cases, individuals and organizations could just be unfamiliar with how to recycle old solar panels.

In some European nations, green technology initiatives were established in the 1990s, and their solar panel recycling procedures have just now begun to mature. In the U.S however, many of the solar panels in use today were installed in the last decade or two and are either not yet at, or just beginning to reach the end of their life.

Because of this, the solar recycling industry in the U.S still has a way to go before it is commercialized and waste facilities are able to accept solar panels.

Though solar energy is a great alternative to fossil fuels, manufacturers in the solar industry need to create end of life recycling programs for these high value materials. Without a way to properly dispose of or salvage raw materials from solar panels for reuse in new panels, the solar waste problem will grow and could negate the eco-friendliness of solar panels.

Options to Fix the Problem

The benefits of harvesting solar energy far outweigh the potential solar waste problem we may run into as millions of panels begin to reach the end of their useful life.

Because solar panel technology is relatively new and panels last 25-30 years, we haven’t had to deal with mass solar waste yet, but we will soon as many of the current working solar panels reach the end of their useful life. By 2030, about 8 million metric tons of decommissioned solar panels and their valuable materials will be piling up.

Recovered materials from these old panels can be saved and reused in new panels to prevent the need for further mining of raw materials.

One of the most straightforward ways to recycle solar panels, especially on a household level is to reuse panels that still have life left in them. While solar equipment does not have a large secondary market for used or refurbished panels in the U.S yet, consumers can live more sustainably by selling or giving away old solar panels to extend their life.

End-of-life photovoltaic panels were unfortunately not designed to be taken apart—the process is expensive, tedious, and has the potential to create hazardous waste—this is why it’s important to get as much use as possible from solar panels before retiring them.

Recycling solar panels can save up to 95% of their construction material to make more solar panels but because the recycling process is not federally mandated, only 10% of solar panels are recycled in the U.S. Panels unable to be reused or that have reached their end of life will inevitably end up in a landfill and all of those valuable, recyclable materials will go to waste.

In the future, manufacturers may consider changing the design of solar panels to allow for easier deconstruction and recycling, but this change would take several decades.

Reusing solar panels can give them a second life and maximize their potential for generating clean energy.

As with most environmental initiatives, the responsibility does not fall solely on the individuals or organizations. In order for solar panel use to continue to expand and reduce our greenhouse gas emissions, government regulations need to be created to aid in the recycling of solar modules.

If government agencies took on some of the responsibility of creating PV recycling infrastructure, the streamlining of the process would expand more rapidly. Without worrying about what we’re going to do with all these panels once they reach the end of their lifecycle, we could confidently utilize solar energy by creating more solar farms.

In lieu of governments building the recycling infrastructure themselves, they might instead provide subsidies or incentives for companies that take action towards providing solar panel recycling facilities.

Solar power energy is one of the most sustainable forms of electricity and supporting the solar industry through programs that ensure we don’t face a future waste crisis is key to a greener future.

Bill Widmer is an outdoor enthusiast who loves to explore off the beaten path. After seeing the negative impacts of waste on natural landscapes across the United States, he became an advocate for sustainability and spreading awareness about how we can be more eco-conscious. He talks about sustainability and renewable energy on his blog Adventures On The Rock.