The Mind-Boggling History of City Recycling (500BC – Present) 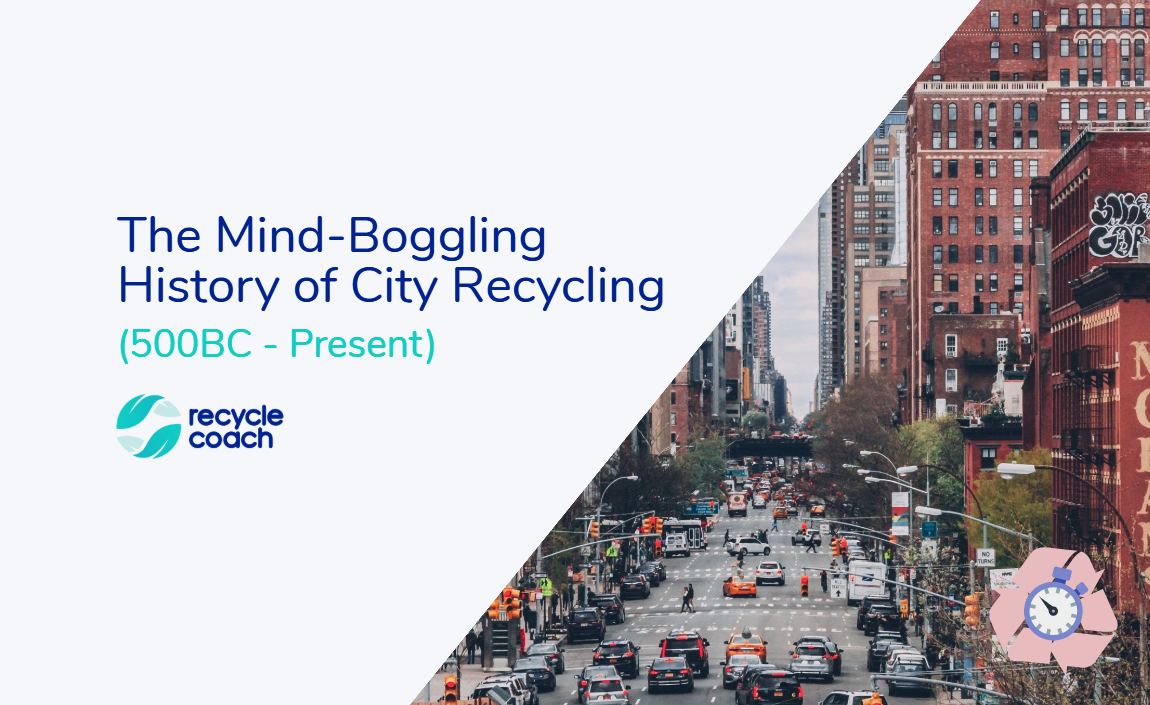 Ever wondered about the history of city recycling? As someone who oversees your local community recycling programs, it’s good to know where you’ve been, so you can see where you’re going.

The coronavirus pandemic has brought many things into sharp focus for Public Works Directors, and other leaders who work to keep our cities clean and functional. As the few remaining recycling centers slowly start to open, residents heave a sigh of relief. But will it last?

The recycling industry has been in crisis for some time. It’s clear that reform is needed to revive an industry plagued by vanishing partners, dwindling budgets and impossible targets. Today, we’re taking a moment to re-orientate, with a brief history of recycling – to offer you a convenient timeline for perspective – and to propose a new way forward.

Our hope is that you not only use this article as a historical resource, but that you build upon its ideas to help reshape the future of the recycling industry. Here is the mind-boggling history of city recycling, and where it could go in an ever-changing future.

500BC: The First Waste Program Was Established in Athens

When did recycling start? The earliest account is in 500BC, when the first municipal dump program was formed in the Western World. Trash had to be disposed of at least a mile from the city.

1776: Recycling is used as Feedstock during the War

The evolution of recycling dates back to 1776, when patriots pulled down a statue of King George III, melted it down and used it to create 42,088 bullets during The American War of Independence. Paper was also recycled as a vital commodity, due to lack of raw materials.

A material recovery center was built in New York, and usable material was separated from trash in ‘picking yards.’ There scape metal, paper, rubber, twine and more were recycled.

A real moment in the history of recycling came in 1904, when aluminum can recycling factories opened in Chicago, Illinois – the first of their kind in America.

The famous recycling slogan, ‘Don’t Waste It, Save It,’ was created during World War 1. Due to large-scale material shortages the government created a Waste Reclamation Service.

The Great Depression was an infamous time of shortages, so residents were encouraged to recycle or reuse everything from scrap metal, to cloth, paper, sacks and more. The saying ‘use it up, wear it out, make do or do without’ became a popular phrase.

Like in WW1, recycling became critical to the war effort during WW2. Materials were commonly recycled, reused and rationed – everything from rubber, to nylon and scrap.

Who invented recycling? No-one in particular. As long as there have been raw materials, there has been recycling. But 23 year old Gary Anderson created the modern concept of recycling with his Mobius Loop logo, which is associated with the ‘reduce, reuse, recycle’ slogan.

One of the biggest movements in the history of recycling happened in 1970, with 20 million people taking part in the Earth Day marches. US Senator Gaylord Nelson raised national awareness about increasing waste and the need to recycle. April 22nd is still globally recognized as Earth Day.

1972: The First Recycling Mill Was Built in Pennsylvania

How has recycling changed over time? After the wars and marches, recycling started to be commercialized. In 1972, the first recycling mill was established in Conshohocken, Pennsylvania.

In Woodbury, New Jersey, the very first curbside recycling program was opened in 1981. The concept was simple, resident’s recycling would be collected for processing at their homes.

By 1995, over 10,000 recycling centers existed in the US. At one point California recycled 80% of its aluminum cans. Two out of 3 cans were recycled in the US at this time.

Another critical point in the history of recycling came in 2000, when the Environmental Protection Agency confirmed the link between waste and global warming. They declared that the best way to lower greenhouse gas emissions (to slow climate change) would be to recycle.

Dell computers sparked the e-waste recycling movement, by offering residents free recycling services for all of their products.

Over the next decade, laws were passed and innovations came to light that improved the industry. Then, China moved to ban 24 categories of recycling imports, which crippled the US – and the global recycling system.

With a new 0.5% contamination standard, China declared that Americas recycled materials were too contaminated to use any longer. With no-where for the recycling to go, and no buyers – the system began to experience seismic shifts, break downs and closures.

Sixteen more materials from the China ban came into effect in 2019. Mass recycling program closures and plant shutdowns were reported.

As programs became more expensive to run, municipalities were forced to severely limit or close them altogether. A recycling crisis was officially announced by leading industry experts.

Even though recycling was deemed an essential service, the sweeping effects of the COVID-19 pandemic that struck in 2020 have caused havoc to an already ailing industry.

There have been many more closures, and municipalities have had to dedicate more time, funding and effort into the increasing issue that is keeping their city recycling programs alive.

2021 and Beyond: Ending Wish-cycling and Launching New Models

Amidst the industry bans and pandemic outbreak – what does the future of recycling industry operations look like? Many experts have weighed in. There is a pressing need now, more than ever before, to continue recycling waste – in order to reduce contamination levels and slow the harmful effects of climate change.

In 2021 and beyond, the industry will need municipal leaders like you to come up with innovative solutions to unprecedented problems. This means improving the rate of technology adoption in the recycling industry, so that digital transformation can have a positive future impact.

Considerations like recycling plant automation, encouraging closed loop recycling policy and environmental protections, and finding new models to fund and expand your existing recycling programs – is paramount to the future of this industry.

Corporate and residential sponsorships are a route forward, putting sustainable growth back in the hands of the private sector, as the public sector recovers and re-orientates.

The recycling industry is too important to shut down. In 2020, consider the history of recycling, the battles fought and won to protect the earth and its people. Let’s chart a new course to rework the systems that we have, to keep these essential city recycling programs alive!